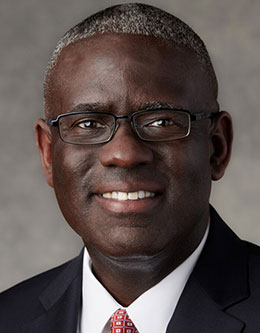 Elder Peter M. Johnson has been a General Authority Seventy of the Church of Jesus Christ of Latter-day Saints since April 6, 2019. He received his bachelor’s and master’s degrees from Southern Utah University and his PhD in accounting from Arizona State University. Elder Johnson has worked as senior accountant for Grant Thornton LLP, an assistant professor of accounting at the School of Accountancy in the BYU Marriott School of Business, an associate professor of accountancy at the University of Alabama (UA), and as an associate professor at BYU–Hawaii, where he was twice named the School of Business Professor of the Year, in 1994 and 1996. In 1997 he received the distinction of BYU–Hawaii Teacher of the Year for excellence in teaching, research, and service.

Elder Johnson has volunteered in several community organizations and served on the board of directors for the United Way Foundation and the Friends of America Foundation. He has also previously served as the director of diversity and inclusion initiatives of UA’s Culverhouse College of Business as well as the president of the diversity section of the American Accounting Association.

Some of his other Church responsibilities have included serving as a full-time missionary in the Alabama Birmingham Mission, Area Seventy in the North America Southeast Area, stake president, bishopric counselor, elders quorum president, Young Men president, and stake financial clerk. He and his wife, Stephanie Lyn Chadwick Johnson, are the parents of four children and served together as mission leaders of the England Manchester Mission from July 2020 to June 2022.