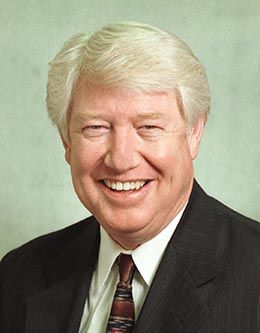 The early life of R. J. Snow was shared between St. George and Washington, DC. He served a mission in France, returning to complete BA and MA degrees in history at the University of Utah, followed by an MA and PhD in political science from Northwestern University. He did postdoctoral study at the University of Oregon and at Harvard.
He joined the political science faculty at UC–Santa Barbara and also filled a two-year appointment as associate director of the UC Education Abroad program at the University of Bordeaux.
Vice president for Student and University Relations and director of the Hinckley Institute of Politics at the University of Utah for 10 years, he was then called as president of the Johannesburg South Africa Mission. After his return from Africa, he was appointed Student Life vice president at BYU. He then became the university’s advancement vice president, serving also as president of the BYU 9th Stake.
He next served as director of the BYU Jerusalem Center for Near Eastern Studies, and then returned to Provo campus to teach African politics, American government, and public policy.  Brother Snow passed away on June , 2006.

“The Ends of the Earth Shall Inquire After Thy Name”