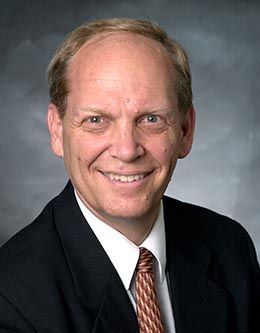 Dr. R. Steven Turley has been interested in physics since reading a book on atoms in the third grade. He loves the elegance and order he finds in the discipline along with the rigor imposed by experimental test­ing of theoretical ideas.
Professor Turley completed a BS in physics at BYU with highest honors. He received the designation of University Scholar for his analysis of Jupiter’s mag­netic fields using data from the Pioneer 10 Satellite.
He entered a PhD program at Massachusetts Institute of Technology, specializing in nuclear physics, with sup­port from a Howard Hughes Doctoral Fellowship. During and subsequent to his studies at MIT, Dr. Turley worked at Hughes Research Laboratories in Malibu, California. While there he studied the mobility of electrons and holes in semi­conductors, manipulated atomic beams with lasers, used atomic fluorescence to diagnose the wear rate of ion propulsion engines, measured optical properties of materials subject to extreme light intensi­ties, and developed accurate methods to compute radar signals from stealthy tar­gets.
Professor Turley joined the BYU Department of Physics and Astronomy in 1995. He has served as chair of that department and is currently the director of Undergraduate Education—First-Year Experiences. His research at BYU has concentrated in the areas of extreme ultraviolet and soft X-ray sources and optics. Some of these optical elements are being used to take movies of the earth’s magnetic field and to study radia­tion on Mars.
Dr. Turley and his wife, Deon, are the parents of seven children.

Was Einstein Wrong? The Difference Between Things We Don't Know and Things We Can't Know