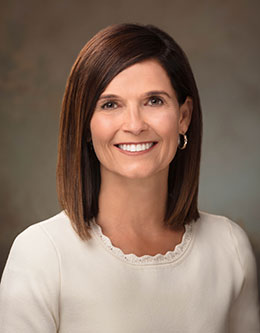 Those Young Women activities were a crucial part of Sister Craven’s life while she was growing up. Because her father was in the US Army and their family often moved to parts of the world where there weren’t many members, Sister Craven was strengthened by the spiritual and social support of the other young women during weekly lessons and gatherings and during regional and stake activities. She also says that she “looked up to and admired” her Young Women leaders.1

As a daughter of converts, Sister Craven knows that being a member of the Church has blessed her life immensely. Her parents were baptized when she was only five years old, and her family was later sealed in the Swiss (now Bern Switzerland) Temple. Because of her parents’ decision to learn about the gospel of Jesus Christ, their family was able to become an eternal family. This decision to learn about the gospel also blessed Sister Craven to attend BYU, meet her husband, and start an eternal family of her own. Now, Sister Craven and her husband, Ron, have five children and twenty grandchildren.

Sister Craven enjoys painting, quilting, traveling, hiking, snowshoeing, playing water sports, playing games with her family, and having gospel discussions around the Sunday dinner table. In addition, Sister Craven has spent a significant amount of time volunteering with CHOICE Humanitarian, for which she served as an executive board member, to alleviate poverty in countries such as Kenya, Bolivia, Ecuador, Peru, and Guatemala.

The Dignity and Demeanor of Discipleship