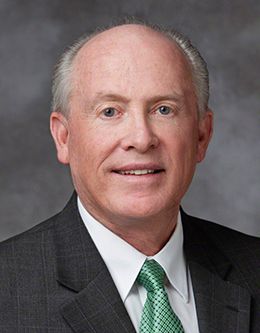 Richard J. Maynes has always been committed to perseverance, determination, and excellence. As a young man, this was manifest in his fanatic love for sports. Determined to become a professional football player, Maynes spent many hours developing his skills on the field. However, a traumatic shoulder injury soon put an end to his budding high school football career. Undaunted, the Berkeley, California, native simply shifted his focus to a different sport. “I can vividly remember shooting one-handed baskets in our driveway while my left arm was immobilized and still healing,” he said. His basketball practice paid off, evidenced by three Most Valuable Player awards at his Hollister, California, high school and an athletic scholarship to play basketball at Brigham Young University.

When his basketball career didn’t play out as planned, Maynes made a decision that would enrich his life: instead of transferring to another collegiate team, Maynes served as a missionary in the Urugay-Paraguay Mission. Experiences such as teaching the gospel to the mayor of Montevideo and his wife who had just lost their son were moments “of spiritual confirmation,” and since then, says Maynes, “the Lord has blessed me with many testimony-building experiences in life.”

Upon arriving home from his mission, Maynes spent the summer working at a resort in Idaho. He befriended his coworker Nancy Purrington, who wasn’t a member of the LDS Church, and gave her a copy of the Book of Mormon. Soon thereafter he baptized her. Their friendship blossomed into a romantic relationship, and the two were married on August 15, 1974, in the Manti Utah Temple. They are now the parents of four children.

After his mission and marriage, Maynes returned to BYU, where he received his bachelor’s degree in business management with a double minor in economics and accounting. In 1976 he earned his MBA at the American Graduate School of International Management, known today as the Thunderbird School of Global Management. His career would lead him to become president of Raymond Production Systems Inc. and the CEO of Fountain Fresh International. Despite his successful career, the Lord had other plans for Maynes, who was called as the president of the Mexico Monterrey Mission from 1989 to 1992.

In 1997 Maynes was called as a member of the Second Quorum of the Seventy and transferred to the First Quorum of the Seventy in 2001. He succeeded Steven E. Snow in the Presidency of the Seventy in 2012. In that capacity, Maynes has overseen many South American countries and the Philippines. His international service has amplified his testimony that we are all children of God. He testifies, “The eternal blessings that come from accepting and then living the principles Jesus Christ taught will ultimately exalt all of Heavenly Father’s children, no matter where they live or what challenges they face in this probationary state.”

Shape Your Life Through Service to Others