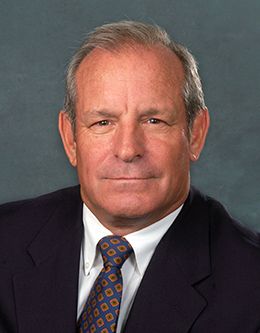 During the 37 years Timothy J. Powers has coached swimming at BYU, his teams have won 20 conference titles, numerous individual titles, and 46 All-American awards. He has had 16 swimmers from 10 countries compete in the Olympic Games. His swimmers have swum in the finals of every major world competition, and his BYU teams have had 30 straight winning sea­sons and look forward to extending that streak this year. Besides these successes, his teams have been ranked in the top five academically for more than 10 years.
Tim Powers received his bach­elor of science in health and physi­cal education from the University of Montana in 1968. He served as a captain in the United States Army and fought in the Vietnam War, being awarded the Bronze Star as well as Air Medals. In 1973 he received his master’s degree from San Jose State University. Professionally he has served as president of the College Swimming Coaches Association of America and has been elected to the CSCAA board on several occasions.
Tim Powers has served as bishop, counselor in a bishopric, and stake high councilor. He and his wife, Patricia Bradford Powers, are the parents of two daughters.

Prepare to Make a Difference