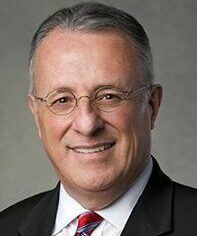 Ulisses Soares was born October 2, 1958, in São Paulo, Brazil. Having heard about The Church of Jesus Christ of Latter-day Saints from an aunt, his parents became converted and joined the Church when he was five years old. He fondly remembers attending church services in the rented space above a local bakery, as well as a loving bishop who diligently watched out for him and helped him in his spiritual progression.

As a young man, Ulisses Soares decided to share with others the gospel that had blessed his own family. He served as a missionary in Rio de Janeiro, and there he met another missionary named Rosana Fernandes Morgado. After their missions, they were married in the São Paulo Brazil Temple in 1982. They have three children and are proud grandparents.

After returning from Rio de Janeiro, young Ulisses Soares diligently pursued an education. He earned a bachelor’s degree in accounting and economics from the Pontifical Catholic University of São Paulo in 1985. He would later tell BYU students that it was difficult to study in a place where no one shared his faith and where many seemed intent on changing his beliefs, but those experiences strengthened him. He later earned an MBA from the National Institute of Postgraduate Study.

Ulisses Soares worked for Pirelli Tire Company and other multi-national corporations as an auditor and accountant before becoming senior auditor for the Church. He was employed by the Church as the director of temporal affairs for the Brazil South Area when he received the call to become a general authority.

Elder Ulisses Soares is no stranger to leadership and selfless service in the Church. He has served in many capacities: elders quorum president, bishopric member, stake high council member, regional welfare agent, first president of the São Paulo Brazil Cotia Stake, and president of the Portugal Porto Mission (from 2000 to 2003). His call to the First Quorum of the Seventy came in 2005, and in that calling he served as a counselor and president in the Brazil South Area, as well as a counselor in the Africa Southeast Area. He speaks often of the humbling strength of the members he met in both areas.

In 2013, Elder Soares was called to the Presidency of the Seventy, where he worked in the North America Southeast Area and the Idaho and North America Central areas. In March of 2018, he was called as a member of the Quorum of the Twelve Apostles. He dedicated the Fortaleza Brazil Temple in his native language of Portuguese in June 2019, and the Arequipa Peru Temple in December 2019.

Becoming a Work of Art