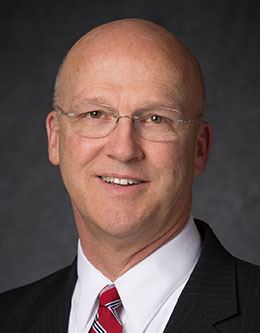 Weatherford T. Clayton was born on March 1, 1952, in Los Angeles, California. Though Weatherford’s father had a rich pioneer heritage in The Church of Jesus Christ of Latter-day Saints, his mother was a convert, only baptized into the Church a year and a half into her marriage. The family grew into the gospel together with the help of a loving and diligent home teacher who taught them for many years. When he was nine years old, Weatherford was baptized, and when he was twelve, his family was sealed in the Salt Lake Temple by Harold B. Lee.

During high school, Weatherford had an opportunity to travel to Japan on a summer exchange student program. At that time, he was struggling with some decisions and needed guidance. He prayed to ask the Lord what he should do. Though he sensed some specific paths he might follow, he most of all felt a powerful and warm assurance that he was loved by his Heavenly Father. This became a foundational experience for Elder Clayton’s life and service in the gospel.

After he graduated from high school in Whittier, California, Elder Clayton attended BYU for a year, enlarging his academic and spiritual foundation. From there he served as a missionary in the French Canadian Mission and then attended the University of Utah, where he received a bachelor’s degree in psychology in 1977.

It was also at the University of Utah that he first met Lisa Madeline Thomas. She had thought she would serve a mission, but received the prompting to stay at the U instead. It turned out that the Lord had a different mission in mind for her. Just three and a half weeks after their first encounter, they were engaged. Married in 1976 the Claytons now  have five children and several grandchildren.

Weatherford T. Clayton continued his schooling at the University of Utah and received his medical degree in 1981. Choosing to specialize as an obstetrician gynecologist (like his father), he worked at UC Irvine for four years before opening a private medical practice.

Weatherford and Lisa Clayton raised their family in Newport Beach, California. Between Elder Clayton’s career and his church service—he was called as a bishop while still a very young father—it could have been easy to let their family fall through the cracks. Elder Clayton says that teamwork held them together. “My wife and I were partners,” he recalls. “She made everything work for our family at home.” The Claytons also made consistent family prayer a top priority. It was in those prayers the family felt unified with God—and the parents in tune to each child’s needs.

In 2013 Elder Clayton left his private practice to work as a laborist. Only a year later, however, he retired to answer a call to be the mission president over the Canada Toronto Mission. He had been prepared by service in the Church as a high councilor, gospel doctrine teacher, and stake president.

While on their mission in Canada, Elder Clayton received the call to be a General Authority Seventy, and he was sustained in April of 2016. He and Lisa see this calling as an extension of their missionary role. They love the Saints, love their missionaries, and they say that what they want most is to “declare to more of God’s children that Jesus is the Christ, that this is His Church, and that the Restoration is evidence that our Heavenly Father and our Savior love them more than they can imagine.”

The Rock of Our Redeemer