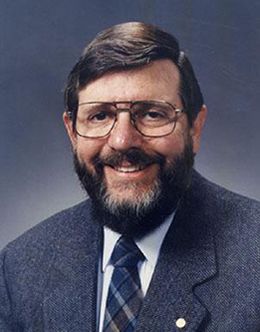 Almost as far back as he can remem­ber, Dr. William Phillips was interested in science. He assembled a collection of bottles of household substances as his “chemistry set” and examined almost anything he could find with the micro­scope his parents gave him. Science was only one of the passions of his child­hood, along with fishing, baseball, bike riding, and tree climbing. But as time went on, Erector sets, microscopes, and chemistry sets captured more of his attention than baseball bats, fishing rods, and football helmets. When he was about seven years old, he decided that science was going to be his life work.
During his junior high school years, he had a laboratory in the family’s base­ment. Ignorant and heedless of the dan­gers of asbestos, electricity, and ultravio­let light, he spent many hours experimenting with fire, explosives, rock­ets, and carbon arcs. He also was on the track and tennis teams at school.
After earning his PhD in physics and completing postdoctoral research at the Massachusetts Institute of Technology (MIT), Phillips went to NIST (then the National Bureau of Standards, later renamed the National Institute of Standards and Technology) in 1978 to work in the Electricity Division. His official duties at NBS originally were related to precision electrical measure­ments; however, as he explains, he was allowed to use “stolen moments to dab­ble in laser-cooling” with lab equipment he brought from MIT. With encourage­ment from NBS management, he expanded the experiments and demon­strated that a beam of neutral atoms could be slowed and cooled with radiation pressure from a laser. NIST’s interna­tionally recognized laser cooling and trapped atom research program grew out of those early experiments. His work with cooling and trapping atoms with laser light led to his 1997 Nobel Prize in Physics which was shared with two fellow scientists—one from Stanford University and the other from France.
In 1997 he was elected to the National Academy of Sciences, considered one of the highest possible honors for a U.S. sci­entist or engineer.
He and his wife, Jane Van Wynen, are the parents of two daughters. They live in Gaithersburg, Maryland.

Science, Faith, and the Nobel Prize