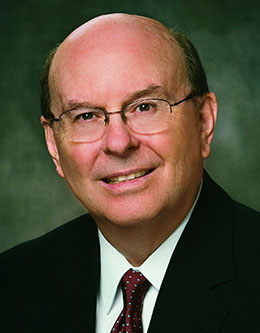 In a worldwide fireside for young adults, Quentin L. Cook said of social media, “being sincerely Christlike is an even more important goal than being authentic.” He more generally advised individuals to ask themselves, “How can I be the righteous loving person that my Father and the Savior would want me to be?”1 Elder Cook’s commitment to Christlike compassion has characterized his service. As a child in Logan, Utah, he once disrupted his school’s fire drill to retrieve a pair of shoes accidentally left behind so that the other boy’s feet wouldn’t be cold in the snow. This humble act of kindness foreshadowed the dedicated service he would render throughout his life. would eventually dedicate his life to serving others.

Quentin LaMar Cook was born September 8, 1940. He was an active boy and played basketball and football, bringing statewide recognition to his teams. He also participated in politics and debate and was elected to student body leadership. One of his fellow student body officers in junior high and high school was Mary Gaddie, who would later become his wife.

Quentin L. Cook’s good parents taught him in his teenage years to recognize the positive qualities in others and to absorb them into his own character. Also during these years, Elder Cook received and nurtured a fervent testimony of Jesus Christ and the gospel. As his older brother Joe prepared for a mission for The Church of Jesus Christ of Latter-day Saints, their father, whose interest in the Church had waned, suggested instead that he go to medical school. The brothers counseled together about it, and after Joe prayed and received a witness of the truth of the gospel and bore his testimony to his father, Quentin prayed mightily for the same unequivocal witness, which he received. A few years later, Elder Cook served his own mission in the British Isles. One of his companions was Elder Jeffrey R. Holland.

Elder Cook returned, and in 1962, he married his childhood friend Mary Gaddie in the Salt Lake Temple. He says of her that it “would be hard to find anybody in the whole world who is as good and righteous and bright,” yet with a “wonderful sense of humor.”2 They have three children, with whom Elder Cook kept a close personal relationship despite rigorous professional and Church service demands.

Quentin L. Cook graduated from Utah State University with a bachelor’s degree in political science in 1963. The Cook family then moved to California, where he earned a doctor of jurisprudence degree at Stanford University in 1966. He joined a San Francisco Bay area law firm as an associate, progressing quickly to become a partner and then managing partner. During his time there, he also served as a bishop for The Church of Jesus Christ of Latter-day Saints, counselor in the stake presidency (with his older brother Joe as the stake president), and as a stake president. Working with Spanish-, Tongan-, Samoan-, Tagalog-, Mandarin-, and Cantonese-speaking wards, as well as English-speaking wards, he grew in his ability to relate to and love people from all walks of life.

Elder Cook moved on to become the president and CEO of a California healthcare system, which merged to become Sutter Health, of which he was vice chairman. He also served on the boards of several profit and nonprofit organizations and as a regional representative and Area Seventy for the Church.

In 1996, Elder Cook was called to serve the Lord full-time as a General Authority in the Seventy and in the Presidency of the Seventy. He served in the Area Presidency of the Philippines, as the Area President of the Pacific and North America Northwest Areas, and finally as the Executive Director of the Missionary Department, where he helped develop Preach My Gospel. In 2007, he was called as a member of the Quorum of the Twelve Apostles.

In that same young adult fireside mentioned previously, Elder Cook talked about his son and daughter-in-law who had been living in Manhattan during the attacks on September 11, 2001. He acknowledged that we live in a “dangerous and troubled world,” but faithfully declared that we need not fear. He told young adults not to underestimate their potential but rather to set goals and accomplish them through hard work and grit. “We can have complete joy because of the Savior,” he testified. His optimism and determination to follow Christ’s example has touched the lives of many Saints.

“Be Not Weary in Well-Doing”

A Banquet of Consequences: The Cumulative Result of All Choices

Be a Missionary All Your Life