Practice makes perfect, but work is more than mere practice. Work opens us to revelation and spiritual gifts.

I enjoy pondering apparent gospel paradoxes. Jesus taught: “Be ye therefore perfect.”1 Yet Paul counseled, “Be content with such things as ye have.”2 Nephi wrote: “Wo be unto him that crieth: All is well!”3 And yet “all is well” are the very words of the refrain in a beloved hymn that chimes across BYU campus each hour.

That same hourly chime also reminds us “no toil nor labor fear.”4 We have labored long and hard to be here at this commencement. We honor those who have worked beyond the normal measure, who of necessity have had 4 a.m. janitorial employment or those like Chris Peterman, graduating with us in manufacturing engineering and technology, who stayed in school and raised his son alone after losing his wife to cancer during his freshman year. We thank those professors, parents, and others who have also labored that we might be here.

However, for most of us the roads of the future will be longer and harder than those we have already walked. Unlike the world, we must not worship the idol of idleness. In an adaptation of Bertrand Russell, I would say that most men would rather die than work, and many do,5 losing in laziness the life they had longed for. A life of leisure is not a right to which we are somehow entitled. Working late into the night to write a paper is not somehow unfair. The economic development of the last two centuries has freed us from the necessity of near-constant labor, but we still are not free from the divine injunction that man is to live by the sweat of his face.6 R&R should not be the goals of our work but rather tools to help us work effectively.

Though we should work to produce, we must not let our works produce unrighteous pride. In humility we must recall, as Shelley observed, that “the lone and level sands” of time will wipe away anything we build on this earth.7 Then why work? Elder Dallin H. Oaks taught: “The Final Judgment is not just an evaluation of . . . what we have done. It is an acknowledgment of . . . what we have become.”8 Work changes us in at least two major ways.

First, we come to value that for which we must work. According to the biblical account, Laban did not require Jacob to work seven years for Rachel; Jacob loved her and he offered to work seven years for her,9 and I believe he knew he would love her the more for it. Those of us who are graduating single have not yet been notified about the fabled tuition refund, yet I think that we will love our future spouse the more for all the awkward dating moments at movies, malt shops, and miniature golf courses.

Work reveals worth and thus brings joy. While I was in high school, my family held scripture memorization contests each year at Christmas. Participants had to memorize all of the seminary scripture mastery scriptures and compete against my father, who, if he lost, would grant the winner anything he or she wanted, “within reason.” The only thing that motivated me more than the joy of the challenge was my teenage disgust when my older, married brother won and used the coveted prize for a new vacuum cleaner. In the following years I studied hard and enjoyed it. As a result, I have found value in memorization, and it has become a labor that I truly love.

Second, work changes us by granting greater insight. It is after days of heavy toil in the harvest that Tolstoy’s Levin has his glorious epiphany and resolves his spiritual dilemma.10 As students at BYU we have learned that often it is in the midst of effort that we best think, reflect, and feel. Though running laps accomplishes little in the productive sense, some of my life’s greatest insights have come during the wearying work of many miles. Practice makes perfect, but work is more than mere practice. Work opens us to revelation and spiritual gifts.

Musicians train themselves to spend hours intimately interested in the intricacies of previously unplayable passages; because of the work required, actors and artists achieve enhanced insight. Art is beautiful and valued precisely because it requires struggle and effort for both the creator and the viewer or listener. Work makes art agony and ecstasy. Honoré de Balzac taught that “constant toil is the law of art, as it is of life.”11

At this commencement let us heed the prophet Heber J. Grant and re-enthrone work as the ruling principle of our lives,12 fearing neither toil nor labor. Life will not be easy, but we should go forth with the confidence that BYU has prepared us well for the work ahead. Let each of us be the person who, in the words of Theodore Roosevelt,

spends himself in a worthy cause; who at the best knows in the end the triumph of high achievement, and who at the worst, if he fails, at least fails while daring greatly, so that his place shall never be with those cold and timid souls who know neither victory nor defeat.13 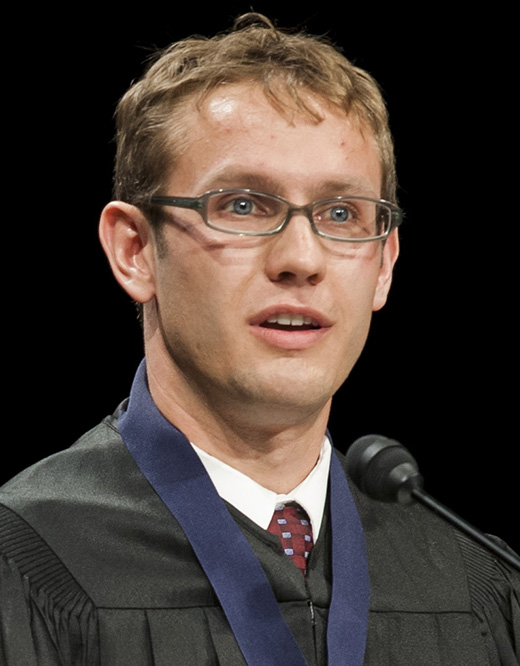 Steven John Pearson spoke as the representative of his graduating class at BYU commencement on 26 April 2007.

The Lord Has a Work for You to Do