The World at Our Doorstep

As we listen to the stories of others, we form invisible connections that bind us to our ancestors and to strangers. These connections can be both fulfilling and compelling, driving us to strengthen relationships, to develop new friendships, and, ultimately, to make the world a better place.

President Samuelson, Brother Beck, distinguished visitors, faculty, friends, family, and fellow graduates: I am honored to be here today. I am a native of Provo. My dad is a professor here at BYU, and I grew up in and around campus, eating at the Cougareat and attending Saturday Safari at the Bean Museum. But when it came time for me to apply to college, BYU was at the bottom of my list. I wanted to go out and see the world. The last thing I wanted to do was spend another four years in Provo.

Yet, four years later, here I am, and I can ­honestly say that I am honored and grateful to be a graduate of Brigham Young University. As you entered campus today, you might have seen a sign proclaiming, “The world is our campus.” If you’ve spent a lot of time here, you may have also heard a parody of that motto: “The world is our campus—and campus is our world.” Well, both of these are true—in very positive ways.

When I first arrived at BYU, I did everything I could to get away and see the world—without actually leaving BYU. On campus, I lived in the German House—living, speaking, and even cooking in a foreign language. From among BYU’s fifty languages I also chose to study Welsh, Tibetan, and Turkish. I studied abroad in the United Kingdom and in Sweden. The wonderful—and ironic—thing is that despite my initial reluctance to come to BYU, it was BYU that enabled me to have those world experiences I longed for.

But BYU had even more to offer. At the start of my junior year I had just returned from a summer in Sweden. I was reluctant to come back to “boring, old Provo.” I was really antsy; I wanted to go places and do things all the time. So I did that the only way I could—by turning my wanderlust toward something closer to home. Campus became my world. I started exploring every corner of BYU: from Wymount to the Maeser Building and the neighborhoods south of campus. And as I looked at everything with new eyes, I found it just as beautiful and fascinating as more exotic locations.

At the same time, I was anxious to replace the relationships I had made in Sweden. I started talking more with my classmates and professors, making new friends and paving the way for research opportunities. I also enrolled in a family history class. The more I learned about my heritage, the more interested I became in other people’s life stories and the more easily I made connections with others. I began to see that it really wasn’t the where that mattered, it was my attitude and perspective that made all the difference. Campus was my world, but when I really looked, what a world it was!

Last summer I was “stranded” in Provo. A younger me might have gone stir-crazy, but the older me had learned better. I took up a new hobby: visiting as many pioneer museums as I could from here to Cedar City—and I made my younger sister come with me. Nearly every town has a little cabin dedicated to the town’s original settlers. I thought my sister would quickly tire of seeing cabin after cabin of pioneer artifacts that tended to look the same no matter where you were. But after a few weeks of this, she and I both looked forward to each new cabin—not necessarily because of the artifacts but because of the caretakers, who were often both incredible old people and incredibly old people.

Through stories of both the long dead and the very much alive, we learned about the strength of human endurance and the capacity to live joyously. In Alpine a man reverently described his ancestor’s long wintry treks to Salt Lake City. In Mona a couple cheerfully shared story after story from their own lives, such as when the young husband tried to help his wife milk the cow and sent her into a pile of manure instead, or the time the wife had gotten tired of the family’s pet goat and served it to them for dinner.

At those tiny museums the historic surroundings were the backdrop for something far more important. As we listen to the stories of others, we form invisible connections that bind us to our ancestors and to strangers. These connections can be both fulfilling and compelling, driving us to strengthen relationships, to develop new friendships, and, ultimately, to make the world a better place. Perhaps the greatest learning we will have achieved at BYU comes from the experiences of interacting with others: learning about the world, learning how to learn, and developing our character in preparation for going out into the world.

So now I encourage you to do just that. Go out into the world, no matter how large or small that may be for you. Find a passion. Learn from your fellow men and women. Make a difference. I believe in you, Class of 2012. 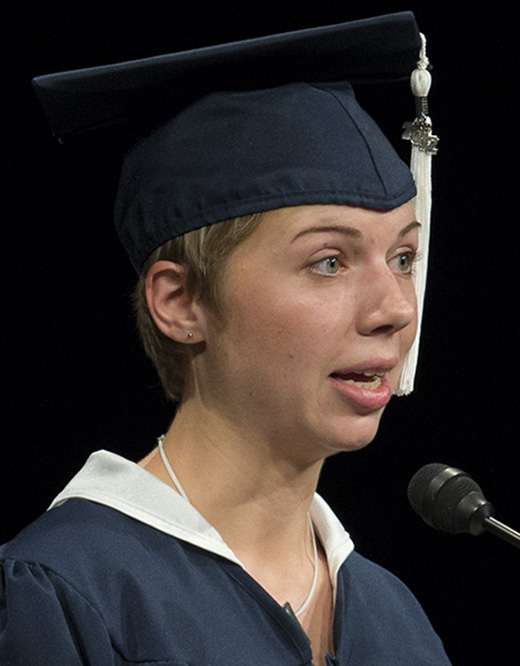 Julianne Long spoke as the representative of her graduating class at BYU commencement on 9 August 2012.

How Do We Think about What Is Human?: C. S. Lewis and The Abolition of Man