Let’s Not Leave Jonny Behind

As we graduate and go out into the world, searching for purpose in our careers and our families, let us remember the poignant words of Charles Dickens, who once wrote, “No one is useless in this world . . . who lightens the burden of it for any one else.”

Good afternoon, honored trustees, distinguished guests, family, friends, and, most important, my fellow BYU graduating class of 2017! It is truly an honor to share this day with you all.

Attending BYU has been a privilege and has taught us many practical lessons that will guide us in the coming years. One such lesson is to never give up, which we learned from our daily ascent up the Richards Building stairs or perhaps from watching the City of Provo as it meticulously paves—and repaves—every street in town. Another lesson we have learned is to obey with exactness, which the BYU parking police have so gently taught us over the years. Finally, taking classes in the winding Jesse Knight Building has prepared us to navigate our way through the ambiguous, multi­dimensional parts of our lives.

Above all, our time at BYU has taught us to lift and serve others. I witnessed one such act of service this past September when I flew to Cozumel, Mexico, as a member of Team USA to compete in the ITU Triathlon Age-Group World Championships. While I was there, all three medalists from the 2016 Rio Olympic Games competed for the $30,000 grand prize in the men’s elite category. Two of the triathletes, Alistair and Jonathan Brownlee, were brothers from Great Britain who had won the gold and silver medals in the triathlon at the 2016 Olympics.

In Cozumel, when the competitors neared the end of the grueling, nearly two-hour race, Jonathan Brownlee held a comfortable lead with his brother, Alistair, trailing him and Henri Schoeman from South Africa close behind. Video footage of the race shows that with 500 meters to go until the finish line, just as the crowd erupted in applause as Jonathan rounded the final corner, the heat began to take its toll upon Jonathan’s body. All of a sudden Jonathan’s pace slowed to a stumble, and he collapsed onto a volunteer standing by the sidelines. There was an audible gasp among the spectators.1

When Alistair rounded the final corner, he saw his dangerously dehydrated younger brother unable to finish the race. Without hesitation Alistair ran toward Jonny, threw his dazed brother’s arm around his neck, and half-carried him as they ran the last 500 meters side by side. Alistair’s deviation cost him a chance at first place, allowing Schoeman to overtake the two and be first to break the tape.

As the brothers approached the finish line, Alistair pushed Jonny across ahead of him, earning them third and second places, respectively.

Alistair was half a kilometer from winning gold as a world champion. Yet rather than race to the end to claim victory for himself, he slowed, picked up his brother, and enabled Jonny to do something he could not do for himself: finish the race.

Reporters swarmed Alistair, incredulous at his noble sacrifice. To their queries he simply replied, “Mum wouldn’t have been happy if I’d left Jonny behind.”2

Just as Alistair’s mother instilled within him a sense of integrity and moral character, our time at Brigham Young University has taught us how to learn and how to serve.

So here we are—at the starting line. Today’s graduation ceremony marks our own plunge into the race of life as college graduates. There will most likely be times in this race when we too will be forced to make the decision between helping someone else or getting ahead. Our brother or sister may not literally drop down in front of us, but there will be, and certainly are, people in our lives right now who feel like they are falling down within.

Just as Alistair sacrificed to stop and help his brother, we can—and should—make sacrifices in our own lives to help those who are struggling along the way. Our diplomas can serve as a reminder that “unto whom much is given much is required,”3 because some races are simply worth finishing together.

As we graduate and go out into the world, searching for purpose in our careers and our families, let us remember the poignant words of Charles Dickens, who once wrote, “No one is useless in this world . . . who lightens the burden of it for any one else.”4

So let’s not leave Jonny behind. Let’s dare to be kind when others run by. Let’s lift those around us without hesitation. I know that if we do so, we will cross the finish line together and make our “mums” proud!

Thank you and congratulations, Class of 2017! 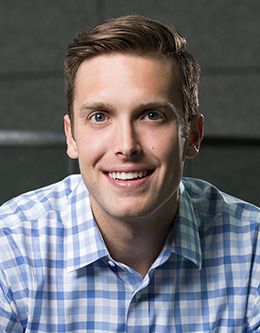 Thomas J. Stone spoke as the representative of his graduating class at BYU commencement on April 27, 2017.

Looking to the Margins: Creating Belonging