Founder and Executive Director of the Equal Justice Initiative

Full text for this forum will not be available. Instead, please access this TED Talk from Bryan Stevenson, or enjoy this summary.

Bryan Stevenson, founder and executive director of the Equal Justice Initiative and bestselling author of Just Mercy, discussed four ways we can create a more just nation in a BYU forum given in October 2018.

“I genuinely believe that collectively, we can change the world,” said Stevenson, whose work involves advocating for criminals on death row. “There are things we can do to make things better, to make our communities healthier, to make our nation stronger.”

To change the world, Stevenson says we must overcome injustice. The United States has the highest rate of incarceration in the world, with 2.3 million people in jails and prisons. Seventy million Americans live with criminal arrests on their records. The Bureau of Justice predicts that 1 in 3 black male babies born in the U.S. will go to prison during their lives.

Right now, said Stevenson, there is a level of acceptance about these statistics. But there is a need for more justice and a need for a greater commitment to what it means to be a fair and healthy society. He outlined four ways he believes we can create that justice.

1. Find ways to get more proximate to those who are neglected and living in the margins.

“There is power in proximity,” said Stevenson.

He shared that many policies the U.S. has don’t work because they are created too far away from the actual problem. Getting closer to the problem and the people it affects is the beginning of how we change things.

Stevenson shared that this experience taught him that when we get proximate, we can wrap our arms around those who are suffering.

Experiences he had in law school helped Stevenson learn how to get proximate. When he started law school, he felt discouraged because it seemed that no one else cared to talk about issues like poverty or racial inequality.

When he went to work with condemned prisoners in Georgia as a student, one prisoner sang a hymn as he was being roughly escorted away after their three-hour meeting. When the prisoner sang “Lord, plant my feet on higher ground,” Stevenson said he knew he wanted to help condemned people get to that higher ground. Seeing that experience up close helped Stevenson realize how he could help.

“Our power is waiting for us, if we get proximate,” Stevenson said. “We have to get closer to those places [where people are suffering] if we’re going to change to world.”

2. Change the narratives underneath the policy issues we grapple with.

In order to create justice, Stevenson said we cannot allow ourselves to be governed by fear. We have to understand the issues and the underlying narratives, then work on changing them.

While advocating for a young boy who had been sent to an adult prison and abused by fellow inmates, Stevenson found himself frustrated with a broken legal system. He asked himself who was responsible for the breakdown. “The answer is that we are,” Stevenson said.

Each member of society is responsible for what they want the society to be known for, and the responsibility lies with each of us to change incorrect narratives. Narratives around mass incarceration, immigration and race are often governed by fear. To overcome this fear, we have to talk about things we haven’t talked about before.

Stevenson explained that it is impossible to travel to South Africa without hearing about Apartheid, to Rwanda without learning about the genocide and to Germany without seeing some marker of remembrance for the Holocaust. Each country has decided to talk about and rectify its broken past.

“We have to change the narrative if we want to be free,” said Stevenson.

Stevenson said he recognized that it is easy to get discouraged by injustice. However, he emphasized, hopelessness is the enemy of justice. If we are not hopeful, we do not have the capacity to enact change.

As a young, hopeful lawyer, Stevenson had the chance to speak with civil rights leaders such as Rosa Parks. When he told them his plan for the future, they said that his work would make him “tired, tired, tired” and that he needed to combat that fatigue by being “brave, brave, brave.”

4. Be willing to do things that are uncomfortable and inconvenient.

Humans are biologically disposed to only do what is comfortable and convenient, said Stevenson. But change only happens when we do hard things.

Stevenson shared an example of one of the times his work was uncomfortable. He got a call saying that the execution for one of his clients couldn’t be stayed. When Stevenson called his client to tell him, his client started to cry. At first, he could not speak to Stevenson because his emotional state caused him to stutter, but he finally said, “I love you for trying to save my life.”

This experience made Stevenson uncomfortable. It caused him to question whether he could do his job anymore. However, he realized that he didn’t do his job because he was trained as a lawyer or because he was the only person who could help these broken people.

“I do what I do because I’m broken too,” said Stevenson.

There will be moments when you feel like you are scratched and broken and battered. It is the broken among us that can teach us the way that mercy works, he said. We don’t have to be whole and perfect to help others. We just have to have heart.

Stevenson concluded by saying, “As a community, we can do things that change the world, that create more justice.” 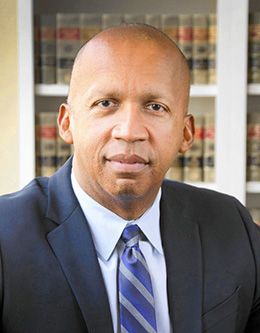 America, a Land of Promise

Faith and the Public Square