I wish to express my gratitude to the trustees, administration, faculty, and students of Brigham Young University for the invitation to be with you for this great celebration of the academic achievements of the men and women who are graduating today. I also want to thank you for the tremendous honor that you are conferring on me. I offer my heartfelt congratulations to the graduates and to the families whose love and support enabled these men and women to achieve what they have achieved in these years of study. Finally, I just want to say what a tremendous honor it is for me to be receiving this degree along with President Cecil O. Samuelson, whose distinguished leadership of this university I admire and whose contributions to intellectual life and to human values beyond Brigham Young University are so exemplary.

There are traditions of thought that propose a radical separation of faith and reason. They ask, “What does Athens have to do with Jerusalem?” Although notable Christians from Tertullian to Kierkegaard have associated themselves with such traditions, they have not gained ascendancy in the larger Christian community. The mainstream of Christianity, while fully cognizant of what theologians describe as “the noetic effects of sin”—that is, the way in which our fallenness not only weakens the human will but also darkens the intellect—proclaims the harmony of faith and reason and the need for faith to seek and be informed by understanding.

In the words of Pope John Paul II, the philosophy professor who became pope and who has now been canonized as a saint, “Faith and reason are like two wings on which the human spirit rises to the contemplation of truth.”1

The two wings are not separate paths to truth. Just as both wings are necessary and must be in working order for the dove or the eagle to fly, so too both faith and reason are necessary for the intellectual and spiritual quest and for the intellectual and spiritual life. And faith and reason do not work separately or independently of one another, but rather they work together, in harmony. Faith and reason mutually entail and require each other. Neither can truly exist—faith cannot truly be faith, reason cannot truly be reason—wholly apart from one another.

This helps to explain why Christianity has built not only majestic cathedrals in which to worship but also great universities in which to study and learn. The very idea of a university is religious and, indeed, Christian in its inspiration, conception, and fundamental content. The greatest modern reflection on the idea of a university—what a university is, what it does, why it does it, how it should do it—is the work of an eminent Christian thinker, John Henry Cardinal Newman, the great nineteenth-century British man of letters.2

And today more than ever we need universities that are true to Newman’s vision, universities in which faith and reason work in harmony, accomplishing what could never be accomplished by faith or reason apart from one another.

Our aim as scholars and students must be not merely to acquire knowledge but also to explore, as deeply as possible, its larger, lasting, and even cosmic significance. We, my fellow faculty members, and our students must aspire not merely to know the truth about this or that or the other object of inquiry but must aspire to grasp its meaning. When we speak, as we rightly do, of viewing or understanding something “in the light of faith,” it is the existential meaning and moral and spiritual significance of our knowing that we are describing or pointing to. I am here echoing a very important point that Ryan made for you just a few moments ago. It is exactly what I mean by the appropriation of knowledge. And the true appropriation of knowledge is possible only against the horizon (or, as we might say, “in the light”) of faith.

For this crucial reason, though it is not the only reason, Mormon or Catholic or Protestant or Jewish or Muslim colleges and universities must be more than simply secular universities with some religious symbols in the classrooms or prayers before classes and other events or lots of religious activities on campus. Faith must play a key role in the intellectual life of the college or university. Faith must inform the curriculum and help to shape the questions we explore in our courses and in our scholarly research.

A pitfall that I think is simply critical to avoid is the aspiration of a religious university to be “the Mormon Harvard” or “the Catholic Princeton,” at least where that aspiration entails mimicking the professional norms, standards, practices, and goals of universities that have opted for a more or less thoroughgoing secularism. Especially in areas of the humanities and social sciences—in which matters of human deliberation, judgment, choice, and action are grist for the intellectual mill—the questions raised and the modes of inquiry and analysis employed should never slavishly imitate what is going on in leading secular institutions. The consequence of such mimicry will be—you can count on it—the abandonment of that part of the mission of the university that concerns what I have called the appropriation of truth. The putatively value-free, purely external examination or description of facts will become the leading object of scholarly pursuit—and will soon come to be regarded as the only valid object of scholarly pursuit—with the assessment of their meaning and moral and spiritual significance pushed to the margins as if these matters were outside the scope of rational inquiry and therefore beyond the bounds of legitimate scholarly labor.

When faith becomes irrelevant to the intellectual mission of religiously affiliated academic institutions—when the fundamental standards by which scholars judge themselves and their institutions are the so-called professional standards of the secular intellectual culture, detached from the spiritual mission of the church with which the university is affiliated—religion will soon come to be perceived as, at best, an extracurricular campus pursuit and, at worst, an obscurantist intrusion into the house of intellect. In the latter case, religious authorities will come to be perceived as having no legitimate role in the governance of the institution and will be resented if they so much as raise questions about curricular matters or the research agendas of members of the faculty.

Now, my friends, what I am describing here is no mere theoretical possibility. It has happened. And it has happened to many colleges and universities that were once religiously affiliated and to more than a few that continue to have at least nominal religious affiliation, whether Catholic or Protestant. The sad story is told brilliantly, and at length, in the book The Dying of the Light,3 written by the late Father James Burtchaell, who was provost of the University of Notre Dame. But for those universities that have remained faithful, including this distinguished institution, secularization is by no means inevitable. Nor is it the case that a decision to resist secularization inevitably undermines the capacity of such institutions to command respect in the larger intellectual culture. A Brigham Young University or a University of Notre Dame need not choose between religious fidelity and the respect of peer institutions, and they certainly need not choose between fidelity to their religious mission and academic excellence.

The deeper questions of meaning and significance cannot permanently be laid aside, even in secular institutions. People can try to sideline those questions, but the questions will keep coming back. Human nature itself will see to it that that happens. We human beings long for the truth and desire its full appropriation. We cannot permanently be satisfied with conceptions of intellectual life and inquiry that place the deepest questions out of bounds or off limits. Already one perceives—not just in the humanities but also in the social sciences and even in the natural sciences—a sense of lack, even a bit of a guilty conscience, for the marginalization of questions of meaning and moral and spiritual significance. Perhaps without being fully conscious of it, some in secular colleges and universities have a sense that their institutions need to be a bit more like Brigham Young University. So this is no time for faith-based colleges and universities to be sloughing off what makes them not only different but, in an important respect, superior.

Excellence is the aspiration and rallying cry of all universities. It will be proclaimed at commencement ceremonies across the land from now through June. But there are of course competing conceptions of excellence and different understandings of the standards of excellence—of what is to count as excellence. The excellence of BYU consists in no small part in its devotion to the appropriation of truth—its dedication to exploring the larger, lasting, and even eternal meaning and significance of what we know or can discover. This dedication is itself the fruit of rootedness in a great tradition of faith; of guidance from wise and devoted trustees; of the intellectual and pedagogical gifts of a distinguished and faithful faculty; and, of course, of the extraordinary generosity of faithful Latter-day Saint families who are moved by love of God and neighbor to support an institution of higher learning dedicated to the integration of faith and reason.

My friends, my prayer for you—for you, President Worthen, for the trustees, for the faculty, for BYU’s graduates, and for the many students to come—is that by the grace of God and with His abundant blessings you will always remain faithful to your mission in all of its dimensions. Pursue the truth, preserve the truth, transmit the truth, and appropriate the truth more and more deeply.

For me, it is an exceptionally high honor to be joining the ranks of the honorary alumni of this institution. Thank you all, and may God richly, richly bless you.

3. See James Tunstead Burtchaell, The Dying of the Light: The Disengagement of Colleges and Universities from Their Christian Churches (Grand Rapids, Michigan: Wm. B. Eerdmans Publishing Company, 1998). 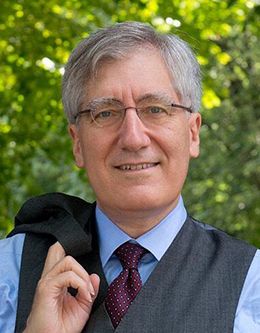 Robert P. George, McCormick Professor of Jurisprudence at Princeton University, director of the James Madison Program in American Ideals and Institutions, and visiting professor at Harvard Law School, received an honorary doctorate when this BYU commencement address was given on 23 April 2015.

Podcast: By Study and By Faith

“The Undiscover’d Country”: Navigating Toward the Future